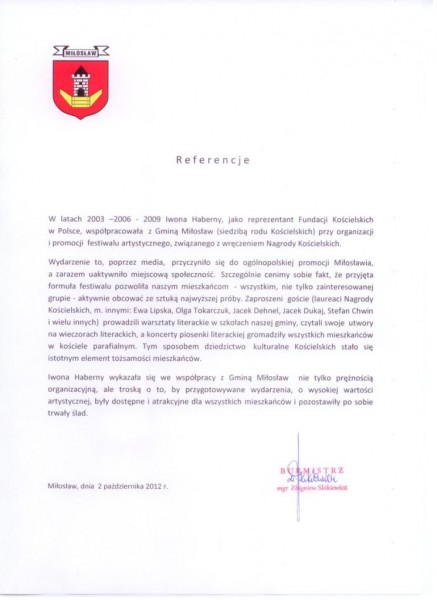 In the years 2003–2009 Iwona Haberny, as representative of the Kościelski Foundation, cooperated with the city of Miłosław (the home of the Kościelski dynasty) in organizing and promoting an arts festival connected with the granting of the Kościelski Award. This event, through its presence in the media, contributed to Poland-wide promotion of the town of Miłosław, and at the same time stimulated the local community. In particular we value the fact that the established form of the festival enabled our residents – all of them, not only a small group of interested individuals – to actively experience art of the highest standard. The special guests (past recipients of the Kościelski Award, including Ewa Lipska, Olga Tokarczuk, Jacek Dehnel, Jacek Dukaj, Stefan Chwin and many others) led literary workshops in local schools and gave readings of their work at evening literary events. Concerts of literary songs attracted all of the town’s residents to the local church. In this way, the cultural legacy of the Kościelski family became a significant part of their identity. While working with us, Iwona Haberny proved herself to possess not only organizational vitality, but also concern that this event, which was of a high artistic value, would be accessible and attractive for all of the town’s residents, and that it would leave a long-lasting impression.